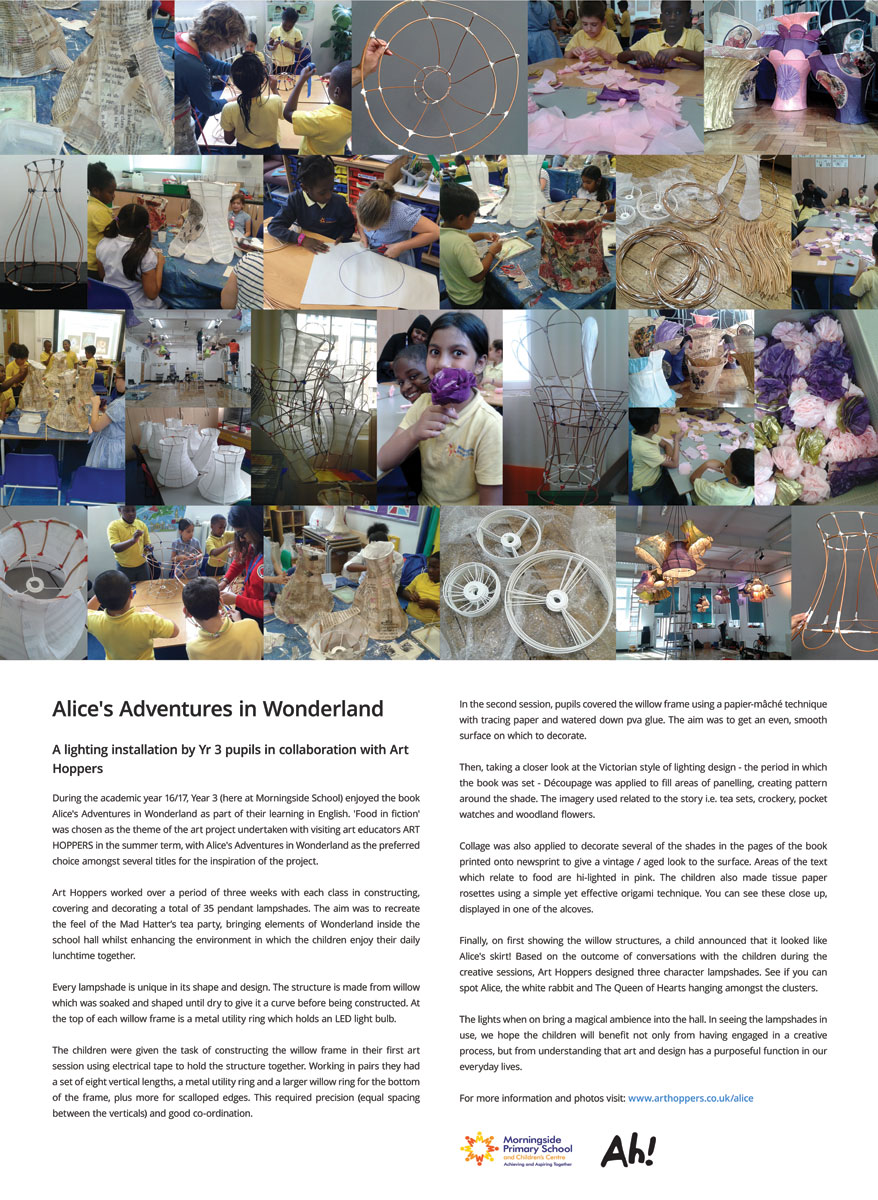 During the academic year 16/17, Year 3 (at Morningside School) enjoyed the book ‘Alice’s Adventures in Wonderland’ as part of their learning in English. ‘Food in fiction’ was chosen as the theme of our art project in the summer term, with Alice’s Adventures in Wonderland as the preferred choice amongst several titles for the inspiration of the project.

We worked over a period of three weeks with each class in constructing, covering and decorating a total of 35 pendant lampshades. The aim was to recreate the feel of the Mad Hatter’s tea party, bringing elements of Wonderland inside the school hall whilst enhancing the environment in which the children enjoy their daily lunchtime together.

Every lampshade is unique in its shape and design. The structure is made from willow which was soaked and shaped until dry to give it a curve before being constructed. At the top of each willow frame is a metal utility ring which holds an LED light bulb.

The children were given the task of constructing the willow frame in their first art session using electrical tape to hold the structure together. Working in pairs they had a set of eight vertical lengths, a metal utility ring and a larger willow ring for the bottom of the frame, plus more for scalloped edges. This required precision (equal spacing between the verticals) and good co-ordination.

In the second session, pupils covered the willow frame using a papier-mâché technique with tracing paper and watered down pva glue. The aim was to get an even, smooth surface on which to decorate.

Then, taking a closer look at the Victorian style of lighting design – the period in which the book was set – Découpage was applied to fill areas of panelling, creating pattern around the shade. The imagery used related to the story i.e. tea sets, crockery, pocket watches and woodland flowers.

Collage was also applied to decorate several of the shades in the pages of the book printed onto newsprint to give a vintage / aged look to the surface. Areas of the text which relate to food are hi-lighted in pink. The children also made tissue paper rosettes using a simple yet effective origami technique.

Finally, on first showing the willow structures, a child announced that it looked like Alice’s skirt! Based on the outcome of conversations with the children during the creative sessions, we designed three character lampshades. See if you can spot Alice, the white rabbit and The Queen of Hearts hanging amongst the clusters.

The lights when on bring a magical ambience into the hall. In seeing the lampshades in use, we hope the children will benefit not only from having engaged in a creative process, but from understanding that art and design has a purposeful function in our everyday lives.

The hall has made such a difference to lunchtimes – it’s so much calmer. We think it’s amazing.

Art and design at its best, beautiful, inspiring and practical!